I don’t know Jacques shit about the Tour de France.

Unless they’re riding banana seat Stingrays with baseball cards pinned to the spokes and their mothers calling them back in for dinner, because that’s the last time I rode a bike. Well, there was one another time, a rental at the Palace of Versailles, where one could wear out a pair of loafers walking from one building to the next. 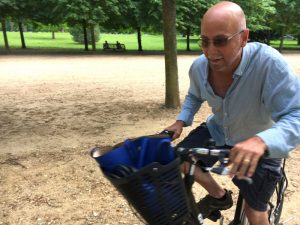 The halls in the Palace of Versailles, lined with mammoth self-aggrandising paintings are so long that what’s really is required is one of those motorcycle rocket ship hybrids used on the Bonneville Salt Flats.

I’ve got some rabid biker brothers back in the Jet City (Seattle) that have requested I somehow finagle a piece of Le Tour paraphernalia at the finish line. Me and about 1,000,000 other hopefuls along the Champs-Élysées wrestling in the pit. How about a bottle of Chanel Ball Sweat #5 instead? They’re from the Jet City, they should concern themselves with airplanes not bicycles.

This is the time of year Parisians go on vacation and follow the last rider right out of town emptying the bowels of the city. This leaves the stragglers to fight over the sole remaining chicken bone because everything is closed. I may lose that five pounds yet. A weird concept, leaving Paris to go on vacation.

The real heroes of the sport are those everyday riders, wearing high heels and looking good while navigating death on the thin Paris streets just to get around, and this guy, a Paris fashion week/ tour de France/ Rube Goldberg combo pack. The average Parisian cyclist doesn’t get escorts passing off energy drinks, doctors kissing their asses to get on T.V. or streets cordoned off so they don’t get run over by a taxi. They embrace misfortune for free.

I tried watching part of one of the legs- why not a thigh, or a bum?- of Le Tour de Trance on le tele. It brought back bad memories of watching bowling while high when I was a kid because I didn’t know what else to do. Go get ’em Earl Anthony, probably now in the corpse league. When did the name officially get changed back from Le Tour de Lance, after or before it was Le Tour d’Enhance? If they really wanted to see a spectacle, they’d be riding unicycles down those mountain passes. Now that’s something I can wrap my head around.

Here’s an update, some bloke named Thomas won the race, sorry I can’t be more specific than that.

2 thoughts on “Le Tour, All Over Le Map”