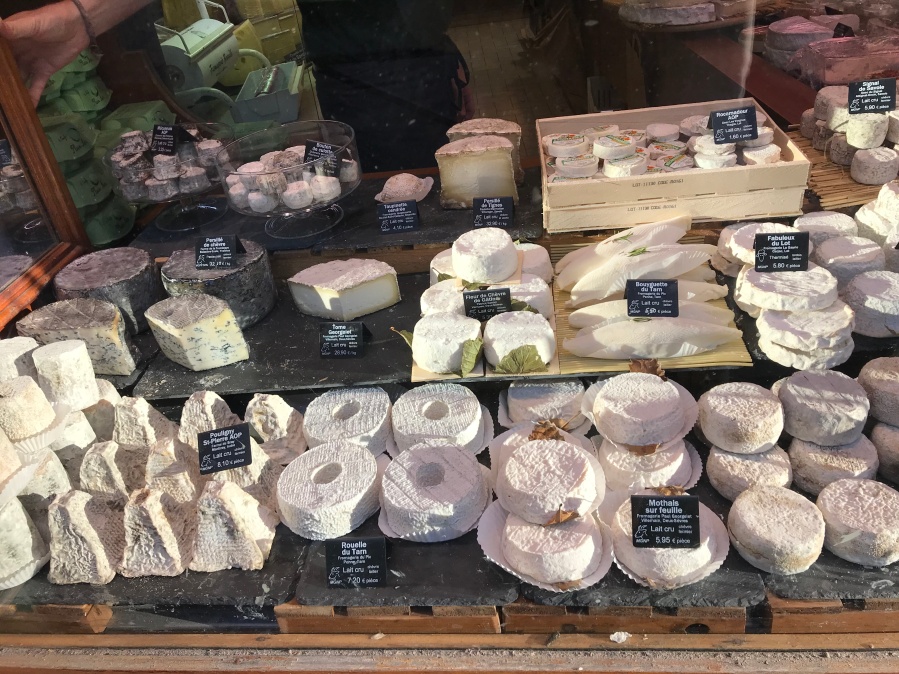 If you want to be hit in the face with an olfactory 2×4, step inside any one of the  fromageries sprinkled about Paris. You’ll find no aerosol Fromage Whizz in France. Be it sheep (brebis), goat (chèvre) or cow (vache), it’s all udderly delicious.

I was late to the fondue and have only recently learned that Roquefort is a place and not just a salad dressing. In Seattle we have the Blue Angles, in Roquefort they’ve got the blue cheeses, and not just one, but 50 shades of blue and none are pornographic. If you’re looking for something that smells like ass, but tastes way better -isn’t everyone- then the seven stinky cheeses are for you, with Limburger coming in at number one. It’s so strong you will fight the compulsion to check your shoe. Also atop the putrid pinnacle sits Stinking Bishop, which is washed, not in the blood of the lamb, but in fermented pear juice. Yes, another stinking Bishop.

Gruyère is the go to fromage when it comes to soupe à l’oignon gratinée. When submerged -in the bubbling hot, clay pot soup broth cauldron- it becomes so elastic that like a rubber band, you could put an eye out with that thing.

The Fromagers really know their stuff.

I wasn’t introduced to the world of cheese until I was well into adulthood. As a child, all I knew about cheese was that it was orange and rubbery and had no smell. You could either put it on Wonder Bread, baked at the Hostess factory on Aurora Ave.- an area where prostitutes also sold their goods- thereby known as the corner of ho and Ho Ho- and wonder when you were ever going to get a decent sandwich, or patch a tire with it. And also, that American cheese wrapped in cellophane did not go bad. Ah, the cheese of my youth.

Cheese is one of the most ancient cultures on earth, right in there with Egyptians, Greeks and the Chinese.

Fun fact, the U.S. produces about 26% of the worlds cheese but exports almost none of it. If you’re like me, I’ll bet you can solve this mystery puzzle.