I know some of you are thinking, will this guy ever write anything useful to me? Probably not, but I will tell this: never put an eggplant in the microwave and never siphon gas with a shop vac. Beyond those two helpful hints, I’m pretty much tapped out, except on the subject of my ongoing adventure, French emersion. Even though the  turbulence has subsided, it still  feels like I’m white water rafting backwards in an under inflated inner tube, which I have done. High.

I used to be a cagey, unwanted wanted man. I Did it My Way was a song wired in to my psyche, which put me on the unfortunate side of the razor wire. Robbing banks didn’t help either. Since then, I’ve surrendered to my new friend, the Universe, giving up my power. I Know, sounds nary fairy, like cash and prizes just fall out of the sky while I lay around and eat.

Truth is, something’s always about to happen. It’s the, “I didn’t see that coming” that jirks my chain.

Pourquoi  did you go, you may ask.

Just when I started fitting into my upstanding citizen suit, the whole country got the D.Ts.

That’s when my friend, the Universe, tainted me by speaking french.

I like to feel safe, so I picked France because my nose was all picked out. When the merde hits the fan here in France, it’s for a predetermined amount of time at a predetermined place. The barriers go up on Friday and a watered down version of Hell breaks loose. The cops and the instigators then clock out Late Sunday and go home to their families. Now it’s time to replace all those broken bank windows and prepare for next weekend’s round of mayhem. Business as usual.

In the U.S. there are 120 guns per 100 people. That’s 1.2 guns for every man, woman and child. How does a person own a fifth of a gun anyway? There are only 14 guns for every 100 people in France, mostly shot guns or ancient duelling pistols and mostly in the sticks, so you’re not likely to get robbed at gunpoint.

I used to hear the bap bap bap of a Glock all the time in my old hood. Two gang bangers simultaneously shot each other dead and went face down in their chile relleno at Maya’s Mexican restaurant,  and I’m still asked, “Do you feel safe in Paris?” If I get slapped across the face with a white glove, then I’ll worry.

So far, my most disturbing encounters:

#1. Almost immediately upon my arrival, an angry young woman assaulted me with an exposed breast in the subway. I thought these wacky parisians, is this normal? I hope she didn’t lose her baby. Thank goodness it was a one off.  There was a time when I would have considered myself The Chosen One. This time trauma creeped in.

#2. Again, hit in the face, this time with a tangy combination of piss and perfume in the belly of the subway.

The danger is, I kinda like number 2. Wait, that just doesn’t sound right.

#3. While out for a walk near the Champs-Élysées looking for that nonexistent bush, I discovered a  toilette publique. The bladder gods strategically set these futuristic oval behemoths down on the sidewalks of Paris for poor planners like me. This is where Ikea instructions for dummies would have come in handy. 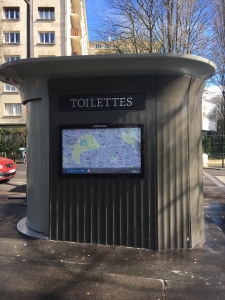 The door opened and I stepped inside. My status as a V.I.P., short lived. Door closed, opened, closed. A major malfunction in progress. Unsuccessfully, I  pushed illegible buttons, while french Siri barked evocative commands at me from a land far, far away. Possibly Narnia. I believe french Siri enjoyed antagonising me. Just when I was comfortable enough to get with the program, the door opened and the toilet folded up inside the wall like a Murphy bed, exposing me to the consternation of the queue. I was forced to choose between a half measure or hosing down the floor. No third option available. Traveler beware.

One thought on “For What It’s Worth”